La Serre was a downtown Albany fixture for more than four decades. It was the backdrop for countless power lunches, happy hours, several political weddings and even, in 1982, Mario Cuomo’s announcement of his run for governor.

So, it was truly the end of an era when the Green Street restaurant’s owner and co-manager, Anne Trimble, decided after 43 years in business to close for good. Her decision came in the face of the COVID-19 lockdown, but also after a period of slow but steady decline.

“We closed when everyone else did, and everyone thought it would be a few weeks,” recalled John Trimble, who co-managed La Serre with his mother after starting his career there as a “kid” some 20 years ago. “But as time dragged, we started looking toward the future and how things weren’t going to bounce back too quickly. We started to think maybe it was time (his mother) would retire, and I would look to do something else.”

That “something else” wasn’t immediately evident. But Trimble had been playing around with a few recipes in his spare time, including one for a condiment made with high quality olive oil, sauteed garlic and shallots, hot peppers and spices. This dipping oil was a hit with Trimble’s friends and family, and he started thinking about how to make it, as he said, “legitimate.”

Luckily for Trimble, he had a dormant restaurant kitchen and a lot of space that was at one time used for diners and catering functions at his disposal. This gave him a leg up on other start-up food entrepreneurs, as he did not have to spend a lot on finding a place to make his product.

“About 90 percent of people in food production use a co-packer who produces for them,” Trimble said. “We had this facility that we couldn’t open to the public, but that I could use to get licensed to make my product.”

The process of starting a new business was not easy in the middle of the pandemic, but once Trimble navigated the necessary licensing traps with state officials he was up and running. Together with several business partners – including his girlfriend, Maura Kelly, cousin Nick Treffiletti and friend Mike Crisafulli – he focused on building the brand on social media and then started visiting local retailers with product samples. 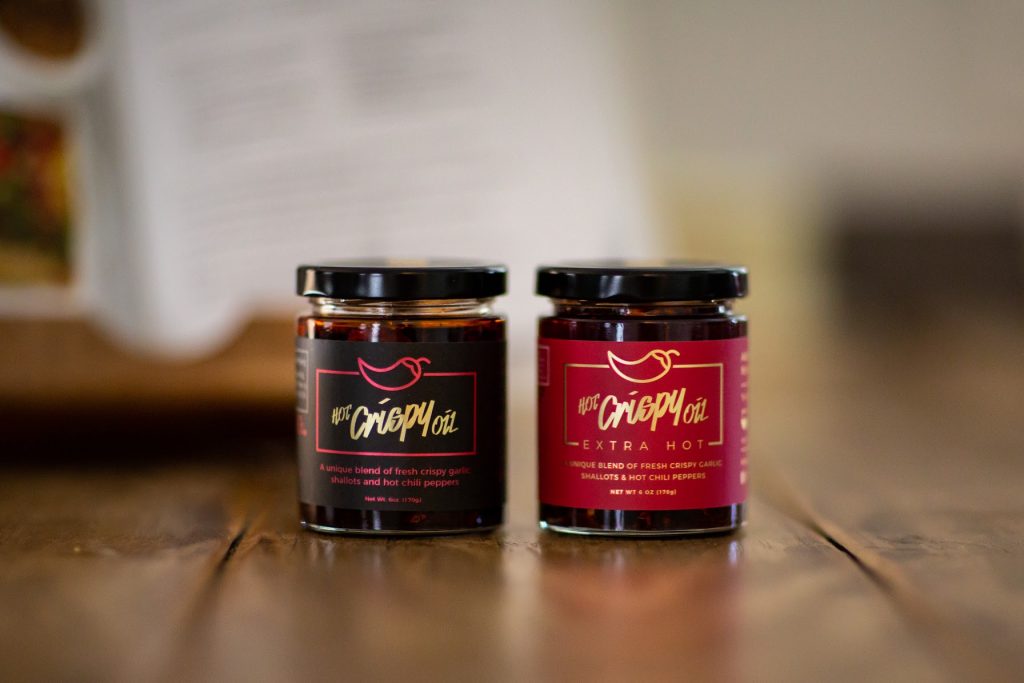 The first retailer where Trimble saw success was Roma Foods, which has locations in Saratoga Springs and Latham, where one case accepted on a “why not try this out” basis ended up selling out in half an hour. This single site has so far sold 50 cases of Hot Crispy Oil, which is now available at some 30 select locations across the Region and state, and even as far away as Wisconsin and Florida.

The future is looking very bright for Trimble and Hot Crispy Oil, which now comes in two versions – original and extra hot. The product is being shipped all over the U.S., and talks are underway with several national chains that have expressed interest in carrying it. The New York Times recently name checked Hot Crispy Oil in a Sunday paper insert about businesses that launched amid – and in spite of – the pandemic.

At some point, however, Hot Crispy Oil will outgrow its current location, which, though helpful in keeping initial costs down, is not set up to house a growing a full-scale specialty food production operation.

“There are logistical challenges of being in a restaurant and not a warehouse facility,” Trimble said. “For example, we were sourcing jars out of Chicago and got 5,000 delivered on the street. It was a matter of taking hundreds of boxes on a hand cart and bringing them in.”

Doing everything himself (with assistance from his partners) has paid off for Trimble, who has converted various parts of the old La Serre to packing, merchandise, labeling and distribution sections. He initially considered using a food developer, but the cost of that was too dear.

“Why send something out to a lab when we can figure it out for ourselves,” Trimble reasoned. “Now we’re seven weeks in, and we’re making money, which is somewhat unheard of.”

Hot Crispy Oil, which retails for about $9.99 a jar, has come on the market at a moment when spicy dipping oils and condiments are having something of a moment – especially since folks are doing a lot more cooking and entertaining (in small groups) at home. Trimble says his oil is different than other products on the market most notably due to its reliance on fresh ingredients, which are fried and later bottled in the very oil in which they were steeped.

Hot Crispy Oil is great for dipping bread into, Trimble says, but it also works well on a variety of other foods – like pizza, Italian subs, and even fried eggs. A number of local restaurants have picked up the oil and are using it in featured menu items, like the Tipsy Moose, which is using it to compliment wings, and Fat Paulie’s Delicatessen in Saratoga Springs, which has a sandwich made of a chicken cutlet breaded with Doritos slathered with mayo made with Hot Crispy Oil.

Despite the growing success of his new endeavor, Trimble admits the closure of La Serre was “bittersweet.” He does not, however, regret the decision to shutter the restaurant for good, especially when he sees his former fellow hospitality industry colleagues struggling to stay afloat as the pandemic and its attendant public health regulations continue.

“We had a really good long run and it was time to move on, but it was hard,” Trimble said. “…We never had to worry about the precautions and regulations of reopening and training the staff. I have tons of friends locally in the business, it’s extremely tough. They’re going forward not knowing what the next few months will bring; there’s so much uncertainty. At least now I’m not worrying about that kind of stuff, the more people are home it’s going to help us thrive.”